With the exciting news we’ve had at Co-op yesterday it felt like the right moment to write about my first 14 months, why I went back in-house (especially when I did) and the great things I see in the future.

In June 2014 I took a job at The Co-operative as a UI Developer. I was the only UI Developer in the company (I’m a coding designer, when I was a lad we were called web designers) and one of only three Designers. I had my interview at the time when articles like this were in the news on a weekly basis. Now I can’t claim that I knew digital would become the cornerstone of the Co-op’s rebuild programme, but what I did know was that I’d seen in-house digital work and, within this small team of dedicated Co-operative folk was an opportunity to do something positive with my skills.

I’d had a varied enough career up to that point, a mix of agencies, successful side projects and one particular in-house role that changed the way I viewed the industry, designed, wrote code and collaborated. For three years I worked with some inspiring, challenging and career defining people at Leeds University.

At Leeds we were a small team of around 16. A split of developers, and designer / front-enders; it was a perfect storm of talent, passion, friendship (sorry, you can be sick if you want) and just enough ego that we thought we could actually make changes in the leviathan of higher education. And actually, we did. Launching sites like Leeds for Life the Leeds HR website (directly influenced by one of the early alpha.gov.uk iterations), and, most recently, (and after my departure) the Leeds.ac.uk main website (although I can’t tell you how proud I am that I originally prototyped the responsive logo).

The point is, a small, dedicated in-house capability launched those websites, based on user needs in an environment where digital innovation or, digital anything was not top priority. I tried other career avenues, but it quickly became clear that it was in this kind of role in this kind of team where I felt I was most effective.

In my first year at Co-op I learnt a lot about selling the work you do and being the voice of it’s merits. Phil and Jack were/are great team mates and together tackled large and complex UX and front-end builds, starting with needs, working agile and building out. We were making a small, but effective dent on the digital experience of our customers in a challenging environment.

But honestly, that’s where the fun is, isn’t it?

Well it is. Every project you push over the line might not be exactly as it was planned and might have be subject to constraints of time, budget, resource and been integrated in a big castle you are not allowed to enter, but each time you learn. Each time you find a way to get some user value in there you didn’t the time before and each time you might change another mind into thinking that your way of working might not actually be so… crazy. Now if you don’t call that fun, you can certainly call it rewarding.

That was then, this is now

That was the case and for all the ups and downs I enjoyed it. But after the hump comes the pin prick of light. And a little while ago our pin prick at Co-operative started to expand.

Two things that happened. Firstly, the rebuild plan. Thanks to the great work done by Phil, Jack, the Digital Team and it’s leaders, the humble UX team was selected to be working on some very important aspects of the rebuild digitally. Around this time too, I was made UX Manager when Phil left and I got more than a little excited about the prospect of leading a little piece of this change for the good. The UX Team has started to grow, we’ve taken on a few very talented people in a short space of time and we’re learning to work and collaborate together. I’m starting to feel the magic of that teamwork from Leeds, and from my early Co-op months again. 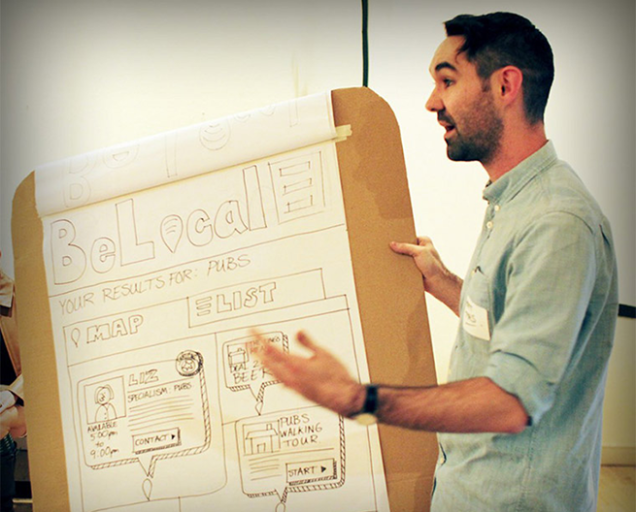 Image from The Skeptic’s Guide To Low-Fidelity Prototyping on Smashing Magazine (fame!)

It’s not all easy, I have been learning a huge amount every day and making mistakes, but I am lucky that I have great mentors and a team that are enthused with the challenges we face.

The second thing that happened was the announcement that the leadership team from GDS were joining The Co-operative to help with our Digital transformation. The guys who’d done the same work I’d followed the progress of over the last 5 years, seen a conference talk about from Paul Annett and Tim Paul in 2012, were coming to the 11th floor.

In the two weeks leading up to the announcement we’d been working alongside the new team and starting to work in a way that feels more natural to me. Inherently co-operative – stand up and talk instead of sit down and email. Sketch it and show it, then build it, test it and learn from it.

In the very first weeks of this journey it does seem to me that this little opportunity, and this little team could grow into something very interesting indeed.

No doubt I’ll keep you updated. In the meantime say hello to me on Twitter (@matttyas) or pop by my personal website.