At one point or another, most digital teams have been convinced that their assumption about how to fix something will work but when they’ve tested it, they’ve found they’re still way off solving the problem.

It’s fine to ‘fail’ as long as you do it quickly, learn from it and make changes to make things better. It’s part of working in an agile way. We should talk about failing more often. So, here’s an example of how we failed fast and learnt quickly in the Membership team.

Making assumptions based on user research

We’d seen from user research that most people, especially those who were new members, didn’t understand what a co-op is, how one operates and why it’s a different way of doing business.

Most people, especially those who are new members, don’t understand it even though we include loads of info on co-ops when we send out membership cards. But it looks like people either don’t read it at all, or, if they do, they don’t remember the information. Without that understanding, the Co-op Membership is just another loyalty card to most people.

During user research sessions when we talked about the idea of a co-op, people seemed interested. Not everyone, but some. The problem seemed to be not with the quality of information being given, but where and how in the user journey it was given.

It seemed if we could more effectively convey the concept of a co-op, that would be enough for some users to become more engaged. Certainly they would be better able to make an informed decision whether they wanted to get involved. They’d become true co-operators as opposed to just loyalty card users.

Making changes based on our assumptions

We designed an interaction where the information about co-ops and Co-op Membership was introduced to people as part of the online registration. Our hypothesis was that at this point in the user journey the member is more committed and more likely to have time to read this information and be more receptive to it.

By chunking the content into sections and importantly making it dismissable, the user would be able to digest as much or as little as met their needs, rather than being faced by the entirety of the proposition in one hit.

We know people don’t read things online. In fact you’re lucky if people read more than 20% of what you stick on a screen so we kept that in mind with the design.

Here are 2 examples of pages from the prototype. 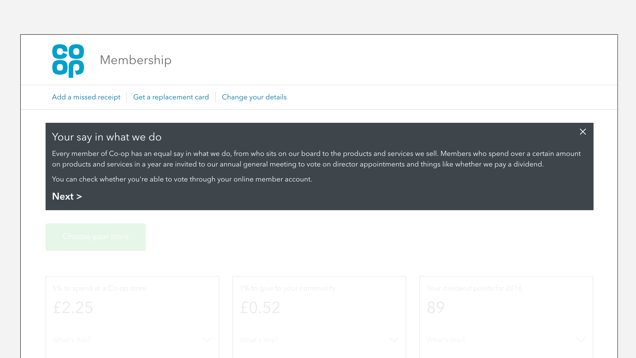 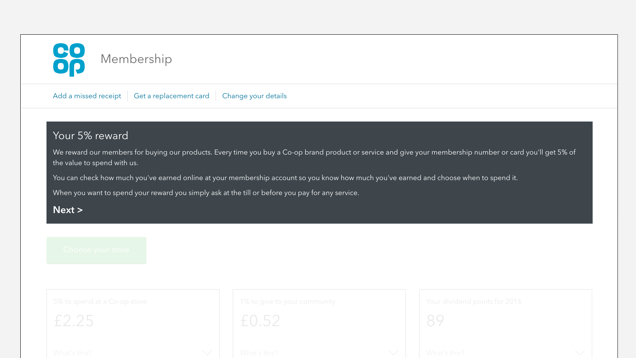 Then we tested the new design

During 2 rounds of research we spoke to 12 people (you can read more about our views on samples sizes in James Boardwell’s blog post ‘Small is beautiful’). The group included a mixture of ages, online capabilities and length of time being a member.

Before showing them our new design we asked each participant to fill in a short questionnaire to find out what they understood about Co-op Membership. We then interviewed them, and showed them the prototype that was intended to help them understand the idea of a co-op.

At the end of the session we asked them to fill in the same questionnaire.

Results showed we hadn’t got it right

As we expected, before looking at the prototype people didn’t understand:

And the post-prototype results weren’t any better – the new design had had zero effect on users’ understanding.

Picking ourselves up. Trying again

We’d seen people read the information, but they didn’t take it in. Although we were giving them more control, we were still imposing a bulk of potentially irrelevant content rather than letting the user discover it in their own time, and reading as much or as little as met their need.

For some people, some of the information would have been both relevant and necessary – but for most their primary need at this point was to find out ‘what’s in it for me’ and everything else was a distraction.

So we iterated again. This time we wanted to give people a positive interaction that let them get only what they wanted, at a time when they needed it.

We added a ‘what’s this?’ drop down within members’ accounts to explain both rewards and Co-op points. Here’s how the current design looks. 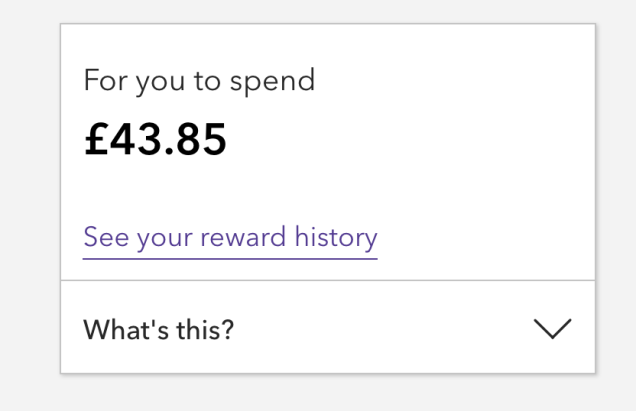 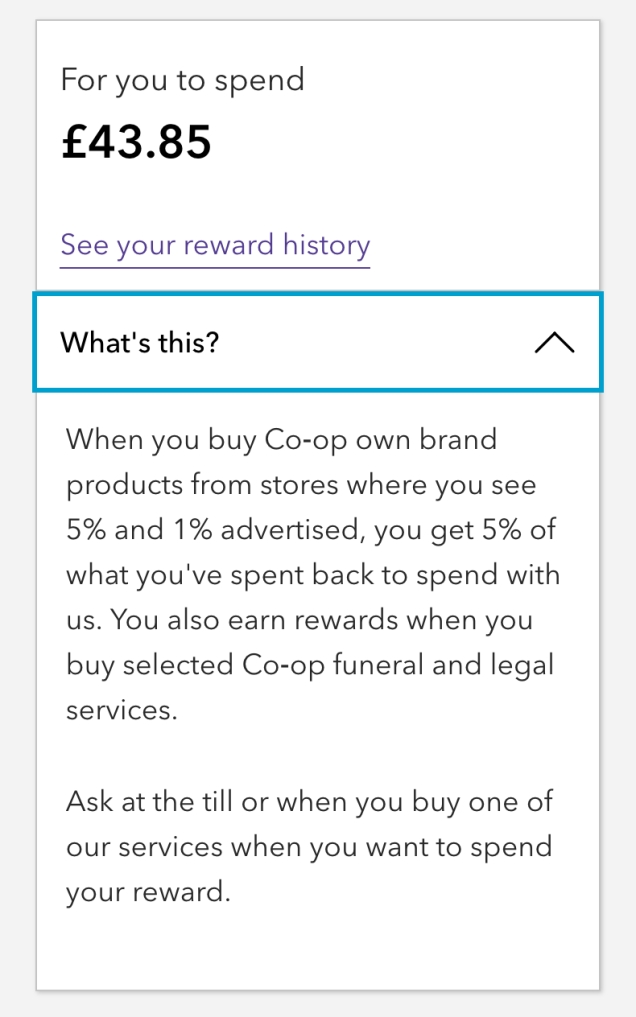 We’d seen in research that many people often didn’t know exactly what they got for being a member so adding this was important.

During research we watched people time and again interacting with the drop down, unprompted. Responses were often comments from the user such as ‘ahhh, so that’s how it works’ or ‘I didn’t know that, I thought they’d send me vouchers’.

If there wasn’t that immediate, unprompted reaction we’d then follow it up with questions such as ‘what made you click on that’ and ‘what did it tell you’. This made us confident in what we were seeing had met the need we’d identified and so we released it. We know people are making use of it. Google Analytics tells us those drop down controls have been clicked 250,000 times since we released it on 14 February.

So after failing often and learning from, and iterating on, what users were saying to us, we’ve made good progress on helping people understand what rewards they’ve earned as a Co-op member.

We’re still researching how best to help people get a deeper understanding of what a Co-op is including elements of the Co-op such as the dividend, democracy and engagement. Those are things we haven’t solved yet, but we will. And it’ll probably involve a lot of failing fast.