The Digital Product Research team at Co-op Digital spent a year exploring new products and services. We researched and tested ideas that we may or may not build. Our latest experiment was around people’s understanding of the energy market and what it would take to get them to switch to a renewable energy provider.

For the last few months the Digital Product Research team has been exploring how we might speed up Britain’s transition to sustainable energy controlled by its communities. By this we mean reducing our use of energy from fossil fuels bought from large multinational companies and moving to using renewable energy from a range of UK-based sources. Our most recent experiment in this area is a prototype for collective green switching.

Collective green switching happens when a group of people all move to a renewable energy supplier. It’s a really easy first step to reducing your carbon footprint. And when a group of people switch at the same time, it’s an effective way to fundraise, as energy companies make a thank-you payment for every new customer. A group of 40 people switching at the same time could raise £1000.

Our mission was to get people who have never switched, to move to a 100% renewable energy company. But we knew that might be tricky.

We are often told that switching energy provider will save us money. But only around 15% of us are receptive to this message and change energy company every year [PDF]. 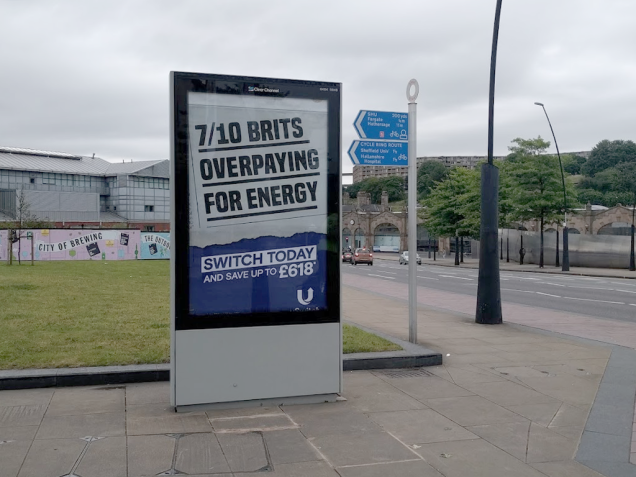 Yet over half of us never switch energy company – despite ads like this and nagging from evangelical switchers. Some of us are sticky, and that’s just the way we are.

It’s not about money

A big early influence on our thinking was a paper on attitudes to switching [PDF]. Xiaoping He and David Reiner are researchers at Cambridge University. They found that most of the non-switchers in their study stayed with the same company even though they knew they were paying too much. Any potential savings don’t seem to be worth the trouble of switching.

It’s the fear of hassle

We found this in our own research too. We held one-hour interviews with 5 parents of school-age children who had not switched energy provider at all or in the last 8 years. They all knew they would save money. But their perception of the process – that it would be a hassle, that it would go wrong, that it would be time consuming – put them off. One parent said, “It just gives me shudders. I just think it would be a nightmare.” Even thinking about the process was stressful. Another parent said, “A lot of mums when I speak to people, they don’t have the headspace to take on stuff.”

We also found that awareness of alternatives to the ‘big 6’ energy companies was low. The people we spoke to had not heard of companies that only sell renewable energy, such as Ecotricity.

When we showed our non-switchers renewable energy companies, they liked them. One said, “I like that. It feels like buying local produce.” And others echoed this sentiment. Clean energy from renewable sources, produced by UK companies was appealing to them. Although buying energy from this type of company was a new idea for them, it went down well.

Would people switch for good?

During our interviews with parents, we showed them our prototype website where they could switch to a green energy provider. With the feedback from the interviews in mind we updated the content on our website. We removed all references to saving money. Instead we focused on how switching could help others. The message on our landing page was: Let Co-op change your energy provider for you and raise money for Hanover Primary School.

The image below shows the our old homepage next to the new one.

We’re pausing work on our collective green switching service for now. We contacted a lot of schools and parent teacher associations and didn’t hear back from any of them. Schools and families aren’t at their most receptive in July.

This means, we can’t prove that people would switch for charitable reasons (to help a school raise money) even if they wouldn’t switch for personal gain. But we think it looks promising, and certainly an effective way to help schools. We’re still excited by collective switching for good, and hope to continue exploring this area soon.

Our goal for this work was to speed up Britain’s transition to sustainable energy controlled by its communities. This is everyone’s responsibility, not just ours. And collective green switching is a great way for any type of organisation to raise small amounts (£1-2K at a time).

We hope to return to this work in the future, but we’re also keen that others carry on from where we’ve left off. Which is why we’ve worked openly. We’ve blogged about our findings and our software is available for anyone to view and download.

We’ll be very happy if anyone uses these resources for a project of their own. If you do, please let us know.