You may remember a few weeks ago I told you that The Federation had been nominated for an Inspired Places Award 2017. Voting is now open so we’ll share the link on our blog and Twitter accounts – so please vote, and remember if you’d like a tour, just get it touch with Victoria Howlett who can organise that.

For the last 2 Saturdays, as part of Design Manchester, the team ran a ‘service jam’, which is where a group of individuals come together to create a service in a short space of time. A lot of work went into organising these events. Thank you to everyone who joined us and got involved, and a particular thank you to Kathryn Grace, Katherine Wastell and the rest of the design team for organising such incredible days. You can view how the days unfolded on Storify.

On Wednesday, our user research team held their first monthly show and tell in Angel Square. Thanks to everyone who took the time to join them and well done to James and the team for sharing what they’ve learnt over the last few months with colleagues from all over the Co-op.

This week, we’re proud to be sponsoring Hack Manchester and Hack Manchester Junior. The junior event saw some amazing teams coming up with really creative solutions to the challenge we set. Well done particularly to Table 9 and Hackerboy who were our joint winners. I’ll let you know next week all about the main 24 hour hack which takes place this weekend at the Manchester Museum of Science and Industry. Good luck to all the teams entering that.

Talking of teams working through the night, I wanted to thank our engineering team working on Co-op Membership. They worked through the night on Tuesday to ensure the successful transition to a new technology platform. So a big shout out to the whole team. Thank you to all and well done.

Christine and the team working on our Going Google trial have been working really hard to make sure that it’s easy for our Digital colleagues to collaborate and work seamlessly with the rest of our Co-op colleagues. This week, major milestone, they delivered the integration that means regardless of if a colleague is using Google or Microsoft – they can easily see one another’s calendars.

This week we welcome Jon Ayre from FLS as our Interim Director of Digital Services and Amber Garland who has joined as an Apprentice Software Engineer to the Digital team.

And sadly we say goodbye to Mel Jones, Lawrence Kitson, Roberto Hortal and Sophie Newton – thank you all for your contributions to our Digital team. In particular, safe travels to Sophie on her move to New Zealand.

And don’t forget to vote. See you next week.

Gemma Cameron, our Principal Software Engineer speaks about what it’s like to work in Co-op Digital and Digital Engineering.

(Transcript) Gemma: I love the variety of projects that we have going on and all the people that are working on them. So we’ve got not just amazing engineers, we’ve also have got some really great product owners, delivery managers, really amazing BAs and the designers are just incredible and we’ve got all the user experience team.

We’ve got some great people working on really innovative cool projects and, you know, what comes out of it is actually doing something good.

I’m supported in all the community stuff that I do outside of work. So I get to you know, Co-op are helping out with Hack Manchester so we support and sponsor Hack Manchester, I also get to run events here, we are sponsoring the Liverpool Girl Geeks Academy, so it’s great getting girls who are like 12-14 to get to some experience programming.

We sponsor events, we attend events, so we were at the Manchester Digital Skills Festival not so long ago and that’s great meeting some of the new graduates and people are looking for work and getting to tell them about the story of what we do here, that we’re bringing brilliant people in who are really good at collaboration, who really care about software quality and you know we’re doing all the good things like test-driven development.

We’re building these great teams but we don’t expect everybody to know all the tools that we’re using or the languages that we’re using. So we have got some people who showing all these great people and behavioural qualities, but they’re not so good on Java and we’re giving them time and space and we’re coming up with a syllabus to give them that training.

The same with test-driven development and looking at all that quality. We have community of practice and we get together as a group of engineers and work out what our, sort of, level of quality should be. I also want to try and see if I can get involved in some of the projects from inception so actually working together with people and talking to them about what their needs are, going to have discovery phase and creating like little alphas that would be awesome because I’ve worked in a start ups before and I enjoyed doing that experience and it would be nice to do it for a more worthwhile cause.

This weekend, Hack Manchester took centre stage at the Manchester Science Festival, hosted at the Museum of Science and Industry (MOSI). 350 participants competed in the annual 24 hour event. It was actually a 25 hour event, as the clocks went back mid-hack. We sponsored the event as a challenge setter, alongside GCHQ, GMP & Ladbible, Cancer Research, Clockwork, Sky, Evestor and Valtech.

The entries across all the challenges were amazing, and I was especially proud of the care and attention that teams gave to our challenge, which was making something to help people experiencing loneliness. We had the most entries to our challenge: 19 in total. For some teams, the reasons for entering our challenge were very personal. Some had been or were lonely themselves, or had a close relative who was lonely.

As our head judge, it was quite the task getting round to all the teams to see what they’d come up with and how they were progressing. Luckily, I was supported by my co-judges Rob Bowley and Emer Coleman. Stephen Foreshew-Cain also stopped by to take a look around.

“Call James” won on the night

Our winners, on the night were The Lovely Lads with their hack, Call James.

They developed an app that uses a supercomputer to connect older people with groups that share their interests. They used technology to solve problems for technologically disconnected people, with a prototype where customers would find a message on the bottom of their Co-op receipt saying, “Interested in meeting some new people? Call James on +44 115 824 4806.”

We chose this as our winner because the idea really answered our brief. They got their idea to actually work while using some really challenging technology. Also, the team, that came from local tech company NorthCoders had only learned to code just 4 months ago – an amazing achievement.

Our runners up were the Nuts Hack for their entry Paltopia and the HackStreet Boys for their Co-op Community Hub. Paltopia is a multiplayer app for lonely children, who are matched up with someone and take care of each other. It’s a safe way for them to interact with someone else, thanks to features like using emojis for chat, and is built around routines, interaction and companionship.

The Co-op Community Hub caught our attention because it turns the idea of an events website on its head. Instead, it automatically creates events based on the interests of people in a local area.

The Best in Show prize went to another of the entries responding to our brief.  The Basket Cases won for their Bleating Baskets, which were talking shopping baskets. When customers with baskets walk past each, other the baskets “talk” to each other, making them an ice breaker between the customers, and hopefully starting a conversation between them.

There were some great ideas on how use digital technologies to make people less lonely, and the hackers came up with some really diverse solutions. Hack Manchester and all the teams did the North proud this weekend and showcased the abundance of digital talent here.

You can watch the awards show and see more pictures of the day.

Thank you to the team at HackManchester and to everyone that took part.

It’s a fantastic way to get people to look at a problem from a different perspective and learn to code and to work in teams. 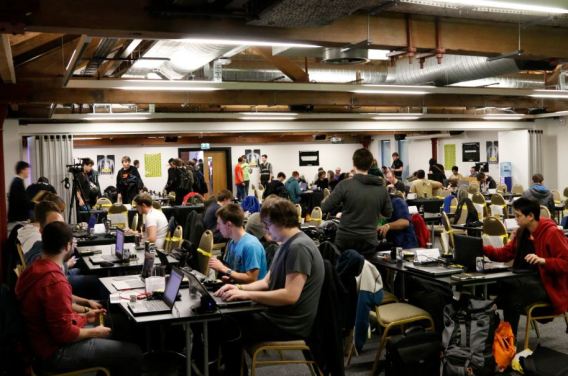 We’d like teams to make something that can help people who may be experiencing loneliness connect with each other/someone. It could be something physical that can go in the front of a Co-op Food Store using something like Raspberry Pi’s, Arduino’s, or something purely internet based.

The Co-op has a history of campaigning for a better society, tackling issues of concern to our members across the UK, whether that’s climate change, votes for women or fair trade. Last year, once again, we asked our members and colleagues to tell us what issues where facing their communities, and as a result we are tackling social isolation and loneliness.

One of the ways we are responding to this issue is through a Charity Partnership with the British Red Cross. We’re not just raising money but also undertaking our own research into loneliness. Already we know it affects many people (one in 7 of our own members and customers). It’s not just something that affects people in later life, it’s something that can affect anyone at any time for many different reasons .

The research will inform how we respond through volunteering, expanding British Red Cross services, through campaigning and through what we do ourselves as a business and employer.

Mike Bracken our chief digital officer and Danielle Haugedal-Wilson who is our business architect will be judging the entrants.

PS4 plus game OR Beats Headphones & Sony Wireless Speaker OR iPad Mini
plus a bag of Co-op goodies.

We’re really looking forward to seeing what’s produced on the day. Best of luck to all of those entering.

We’re currently looking to recruit talented digital engineers/developers to support the growth of our unique business. We need people at all levels, with all kinds of skills and experience. If you’d like to be part of our digital revolution, find out more here.