A few weeks ago, the latest cohort of girls graduated from the Liverpool Girl Geeks Academy. The girls, aged 13 to 17, had spent 8 weeks at after-school or after-college workshops that aim to encourage and inspire them to consider a career in tech. Co-op Digital sponsor Liverpool Girl Geeks and I was invited along as a representative to speak at the graduation ceremony.

Parents don’t have to be experts to show support

As I was giving my congratulations speech, it struck me that the room was packed out with parents, grandparents, aunts, uncles and siblings. Seeing such strong family support in the audience made me think about the important role parents and the wider family have in helping girls to explore technology and coding.

I doubt everyone who was celebrating at the graduation was tech savvy. Chances are they might not have a clue what coding is, let alone how to do it. But that’s fine, they don’t need to. The important thing is that they’d recognised the importance of nurturing girls’ interest in this area, just like they might for children who show an interest or aptitude for playing sport or music.

Carry on fighting the good fight

Liverpool Girl Geeks wants to decrease the gender imbalance in tech by teaching and inspiring women to consider a career in the sector. Co-op Digital partners with them as we feel strongly about increasing diversity too. Unfortunately, in February 2017, Manchester Digital released new research that showed the gender skills gap in the north west had increased since the previous year, particularly in technology roles. The report said that only 12% of technical roles belong to women.

So yes, programmes like Girl Geeks are invaluable when it comes to actually teaching skills and building confidence in young women. However, getting into workshops or onto courses in the first place is much more difficult without someone at home recognising an interest, supporting it, encouraging an application and, in the case of younger teens, physically getting them to a venue to learn. 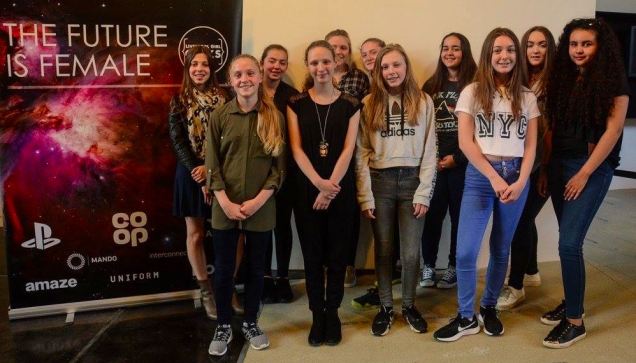 Each 8-week Academy course has a theme. The girls who graduated recently did workshops around code and music and learnt that knowing how to code can lead to a wide range of careers from engineering to fashion. On this course they learnt how to use code to make their own music using publishing platform Bandcamp.

Applications for the next Girl Geek Academy are open

The next Academy workshops are themed around wearable tech and are lined up to start in September 2017. If you know a girl between 13 and 17 with a creative and curious mind and an interest in technology, digital and design, encourage her to apply now.

To find out more, watch a report about Liverpool Girl Geeks