Hello, I’m Danielle Haugedal-Wilson, working as an Architect with the Co-op Digital team. For the past 16 years I’ve worked in every business area the Co-op has owned (about 10 unique sectors) and was involved at its digital beginnings.

In 1999 I joined as a finance undergraduate on a degree placement. I fortuitously landed in the Retail Marketing Development team and their spirit was immediately different to how I viewed a stereotypical future in my chosen field. This nine-member strong team pioneered new marketing ideas, new ways of trading and also ran the ‘Divi’ scheme launched in 1995. The team was small, and what they lacked in numbers they made up for in enthusiasm and drive.

First there was wine & whisky

My first assignment was to administer the online wine site, Grape & Grain, launched a few months before I arrived and thought to be the very first in the UK. You may chuckle at its appearance but it did rather well. 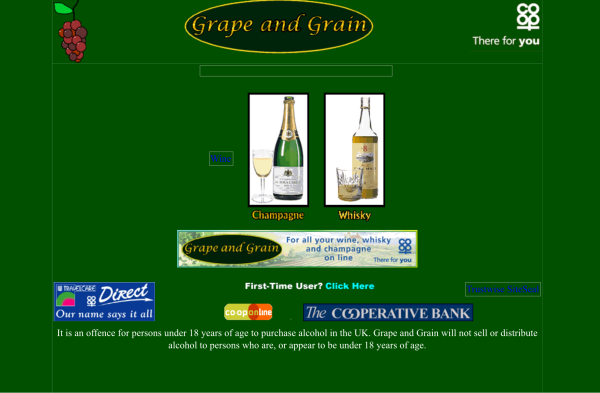 Then there was Christmas Shopping @ Work

During the winter of 1999 we trialled Christmas Shopping @ Work using leaflets and our email client at the time Lotus Notes (of all things). It enabled colleagues in Manchester to order their ‘big’ Christmas shop and collect it during the last week before Christmas on their way home from the office. Collection week was hectic. Lorries were parked up opposite the Manchester Office complex (where 1 Angel Square now stands) and the entire Marketing Development team, along with store colleagues, handed out orders from 4pm till 7pm and beyond.

Setting up a trial of the Co-op2U Home Delivery service in 16 locations around the UK was quite an undertaking for my next project and for someone who had no direct experience of this kind of thing. Before I knew it I was choosing the colour scheme for the logo, the look of the driver’s uniforms, and running the photo shoot for the marketing material. It was as terrifying as it was brilliant.

The Home Delivery and Shopping @ work were the roots of our own online grocery proposition. In 2000 Co-op2U launched on a store-based fulfilment model in five stores and was the third grocery retailer to go online after Tesco and Sainsburys. Given our relative size, that was a bold move. 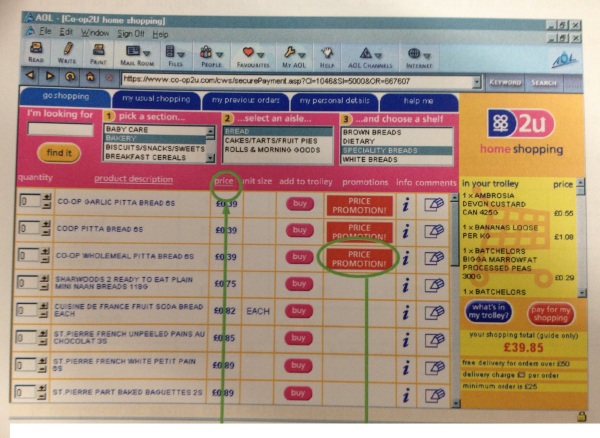 I created the end to end process of how a customer’s shop was picked. Some of the flow and layout of the online design was my work – I was doing UX and didn’t know it. Even working on data set-up, I loved it all. Seeing that first order come through brought such a sense of achievement and pride. The site, as you can see, was simple and we went live with an e-commerce site, yet we also offered a CD-ROM disc so you could shop offline back in the slow, slow days of dial-up internet. I still own a copy, it’s possibly the only one left and I wonder if it should be in our museum!

The trial was over just over two years later and the sites closed. The Co-op is different and so is the market in which we operate, something which Richard Pennycook reflected on in his recent Radio 4 interview with You&Yours. His opinion that online delivery is expensive to operate and not something we’ll be taking on again any time soon is one I wholeheartedly agree with in the current climate.

The pioneering spirit of that Retail Development team changed my views on what I wanted out of a career. The diversity of the Co-op appealed – where else can you work on Farms one week and Funerals the next? But my feelings went deeper. It was its heart, the Co-op model itself and what it stands for – more than just profits but for the values it was founded on: self-help, self-responsibility, democracy, equality, equity and solidarity.

So, I look forward to the revival of that pioneering spirit in digital at the Co-op with the arrival of Mike Bracken and his team.

6 thoughts on “A little Co-op digital history & me”