This week, the design team held a show and tell to discuss 2 questions:

If you couldn’t make it, we’re writing up some of the examples from different areas of design that we talked about and we’re posting them on the blog this week. They’re aimed at Co-op colleagues whose expertise are in something other than a digital discipline.

Here’s how the process tends to work:

The process is expensive, time-consuming and as with all human processes, there is room for error.

What we wanted to achieve

We wanted to create a more efficient, easy-to-use service. We wanted to connect the computer systems that are already being used in Co-op Funeralcare branches and integrate them directly with the customer relationship management system colleagues use in head office.

What we knew was limited. We had an idea what the start of the process was for clients and colleagues because we knew what the paper form looked like. We also had sales data from the very end of the process. But in order to improve efficiency and ease of use, we needed to know a lot more about how things are working in between these 2 points.

For both colleagues and clients we wanted to get a clearer picture of:

We arranged some site visits for our ‘field research’. 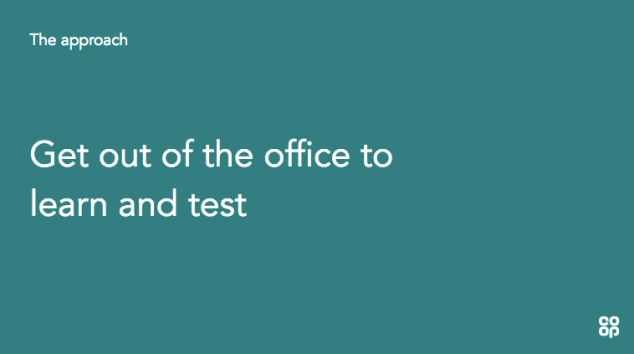 Why? Because when people feel at ease they’re more likely to open up and speak honestly. For this reason we spoke to our funeral arranger colleagues in a context they’re familiar with – in the rooms where they regularly create plans with clients. Talking to them here helped them relax, and because they weren’t in a place where their seniors might overhear, they were less guarded than they might be if we brought them into head office.

Seeing mistakes happen, figuring out why they happen

Talking to them was good but seeing colleagues fill out the paper plans was invaluable because we could observe:

All of this helps us see where we can improve the design.

Feeding observations into the design

When we were talking through the paper forms with arrangers, they told us they often found there wasn’t enough space to capture a client’s personal requests. Because they’d come up with a reasonable work-around, it might not have been something they would have mentioned to us if we hadn’t been there, in their office, looking at the forms together. Being there helped us make sure we didn’t miss this. They showed us examples of when they had worked around a lack of space by attaching an extra sheet to the paper form they were submitting.

In the example below the client has requested to be dressed in ‘Everton blue gown with frill’ and they’ve been very particular about the music before, during and after the service.

Every funeral is different – just like every life they commemorate and the paper form didn’t accommodate for the level of detail needed. The work-around they’d come up with wasn’t hugely painful but good design is making processes pain free. We fed our observations back to the digital team and designed a form that allowed for individuality. It has bigger open text boxes to record more detail as well as including drop downs and free text boxes for music on the day.

The benefits of moving across to digital forms include:

Field research helped get us to this point

We’re now testing the new digital forms in 15 branches. We’ll be rolling them out to more and more branches over time but we’re starting small so we can iron out any cracks.

So far, the feedback from colleagues is positive. But without observing colleagues in context, there’s a certain amount of assumption about the way they work on our part. Field research contributes to the fact the pre-paid funeral plan service is design-led.

If everyone shares an understanding of the benefits of being design-led, it’ll be easier for experts from around the business to work together to deliver value to Co-op customers, colleagues and the Co-op as a business. If you didn’t make the show and tell but would like to find out more, email Katherine Wastell, Head of Design.