Two years ago we launched Shifts – a web app that allows Co-op Food store colleagues to view their work schedules and information about their pay and holiday entitlement. We’ve been developing it ever since, but the past few weeks have been especially challenging because we’ve been responding quickly to meet emerging needs of our store colleagues – they are our front-line key workers.

On 19 March, we used Shifts to send out a message asking Food store colleagues to ‘refer a friend’ to come and work in their store. It was a call for people to help serve their communities by taking on work in stores to meet the higher demand for groceries, and to cover for colleagues who were self-isolating. By the end of March, Co-op stores around the UK had welcomed thousands of new stand-in colleagues. The Shifts web app has played a huge role in the induction process for new joiners.

The aim of Shifts has always been to empower colleagues and give them the information they need at a time and in a place that suits them. But a convenient, remote way of receiving information has become more important than ever.

Here are some of the changes we’ve made to Shifts to try to meet emerging needs of existing and new colleagues.

Shifts uses Intercom to send messages to colleagues about new features, and colleagues have been able to contact us through it too. It’s been useful in the past, but it’s taken on more importance in recent weeks.

We’ve been working closely with teams in the retail support centre to update colleagues about personal protective equipment, information they need as key workers and what they needed to know regarding school closures. 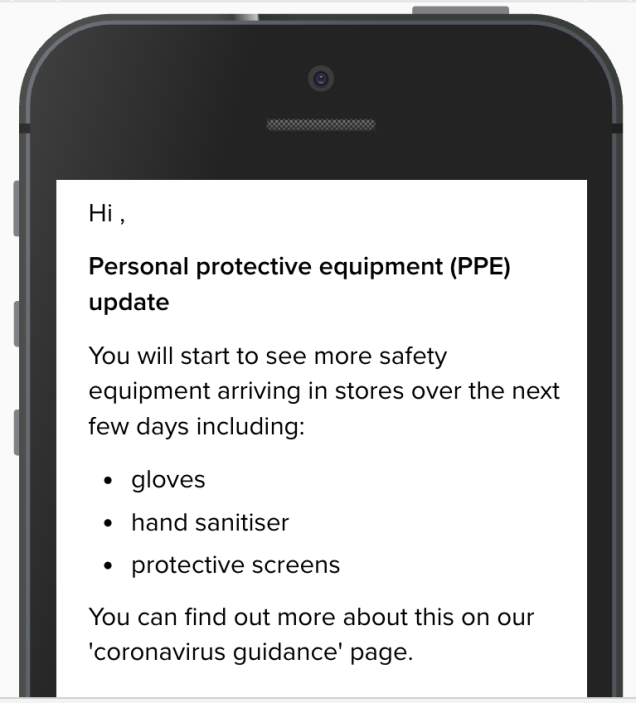 We also sent them a thank you message from Jo Whitfield, Chief Executive of Co-op Food.

Data shows that some of the messages were seen by over 43,000 store colleagues which we do not believe would have been the case if it wasn’t for Shifts being accessible for all colleagues on their personal devices.

Showing overtime at a different store

We recently added the capability to highlight when someone is working overtime at a store they don’t usually work at. Now, we can include them – and flag that this isn’t their ‘home’ store – on the same screen as everyone else who’s working a certain shift.

We’d been finding it challenging to display this information, but at a time when many new crisis colleagues are helping in different stores it became more important to fix it. We prioritised work on this and now it’s resolved, we know it’ll be a much better experience for managers.

Matching up colleagues with shifts and stores

We know the demand for colleagues fluctuates between stores – some have been struggling to have enough colleagues in each day, whereas others have too many. And because a significant number of colleagues may show virus symptoms at the same time, stores could easily be left without their regular workforce while it self-isolates. To help with this, we’re currently working on functionality to allow managers to advertise available overtime shifts in their store to colleagues in nearby stores. This will allow colleagues to work where they’re most needed, and in places that are convenient for them.

This month we’ll be releasing our ‘Available shifts’ feature which will let managers advertise overtime shifts and which roles they’d like to find cover for – this is open to colleagues who usually work in their store or ones who work in other stores in the area. Until now, managers have been using notice boards, WhatsApp groups or text messages to arrange cover which – according to research – can take longer than it should. The workaround can sometimes cause confusion too so the new feature should simplify and speed up the process. We hope it’ll be one less thing for colleagues to think about.

As always, we’re starting small. We’re testing this new feature with colleagues in around 10 stores and will roll out.

Here in the Co-op Digital team we’re not on the front line. We’re not key workers.

But our colleagues in stores are.

There’s been a real eagerness in the Digital team to do whatever we can to support our hero colleagues, make their lives a little easier and lessen their cognitive load.

We’re fixated more than ever on adding value right now. Everyone wants to be useful in a crisis.