The Membership team, like many Co-op Digital teams, has pushed back planned work to react to the virus outbreak.

We recently launched a service that lets our members donate all or part of their reward balance to the Co-op Members’ Coronavirus Fund.

Members can donate at coop.co.uk/donate

The money raised through reward donations will:

Helping our members to help others

We’ve always helped our members to support those in need. We donate 1% of what they spend on selected Co-op branded products and services to their chosen community cause.

We also add 5% of what they spend to their reward balance.

By creating a way for members to donate these rewards, we’d make it possible for them to:

Being sensitive to the effects of the pandemic on everyone

We wanted to get the service live and start raising money as soon as possible.

But with the team still adapting to working from home and facing many extra stresses, it was going to be much more challenging than usual to collaborate.

We needed to consider the effect that the virus outbreak was having on our members too.

Some people are unable to work, have lost their jobs or have reduced income. We knew that some members might be relying on their reward balance to help feed their family. Because of this, it was important that it didn’t ever feel like we were putting pressure on members to donate.

We wanted to give our members the option of choosing how much of their reward balance they wanted to donate, but we knew that this functionality was complex and would be hard to build.

In the interest of getting value to users as soon as possible, we decided we should:

At first, we hoped we’d be able to get the service live in time for Thursday 9 April, 2 and a half weeks away. But once we’d explored the requirements in more detail, it became clear that this would be a huge stretch. And we didn’t want to risk jeopardising both the service and our mental health by setting an unrealistic deadline.

We explained this to the stakeholders, and they listened. We pushed the deadline to reduce pressures on the team, and gave ourselves 3 weeks to build the first version of the service.

On Tuesday 14 April, we turned on the functionality for members to donate their full reward balance as scheduled.

On Thursday 16 April, we turned on the functionality for members to choose how much of their reward balance they want to donate.

Any member with a reward balance who logs into the membership dashboard on a desktop sees a banner directing them to coop.co.uk/donate (as shown in the screenshot below).

The screenshot below shows the same page on a mobile, followed by the 2 screens that follow if a member chooses to find out more and donate.

The image below shows the sequence of screens a member would see if they specify how much they’d like to donate. 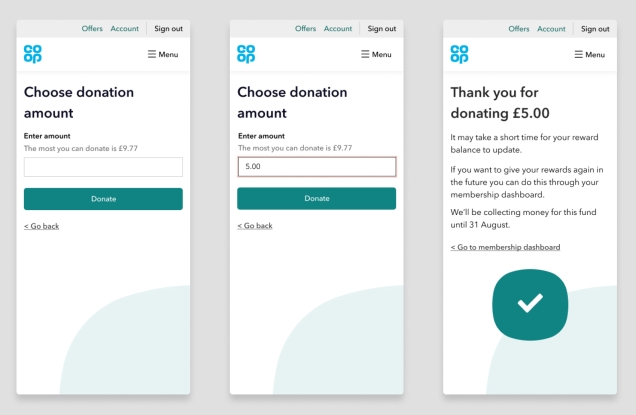 Members who donate then receive an email to confirm their donation.

If you donate part of your balance or donate all your rewards but then go on to earn more, you can come back and donate again.

Members will be able to donate their rewards until 31 August.

Our members have been donating generously

We’ve set up dashboards so the team can track donations in real time.

At the time of publication, our members have already donated enough for FareShare to be able to provide hundreds of thousands of meals.

We’ve been emailing our members to let them know about the service. The email takes members straight to coop.co.uk/donate. It also outlines other ways the members can help if it’s not possible for them to donate their rewards.

Adapting our ways of working

To make sure we could collaborate effectively while working from home during these difficult times, we:

Getting this service live was challenging, but the hard work was more than worth it. This money is going to make a huge difference.